As a reward for working hard on my studies, I decided to treat myself and get a new eyeshadow palette. I was specifically wanting a palette with purple shades included that wasn’t going to break the bank, and I remembered hearing about the W7 palettes. The RRP is £9.99 on their official website, however I snagged it for just over £4 on Amazon! 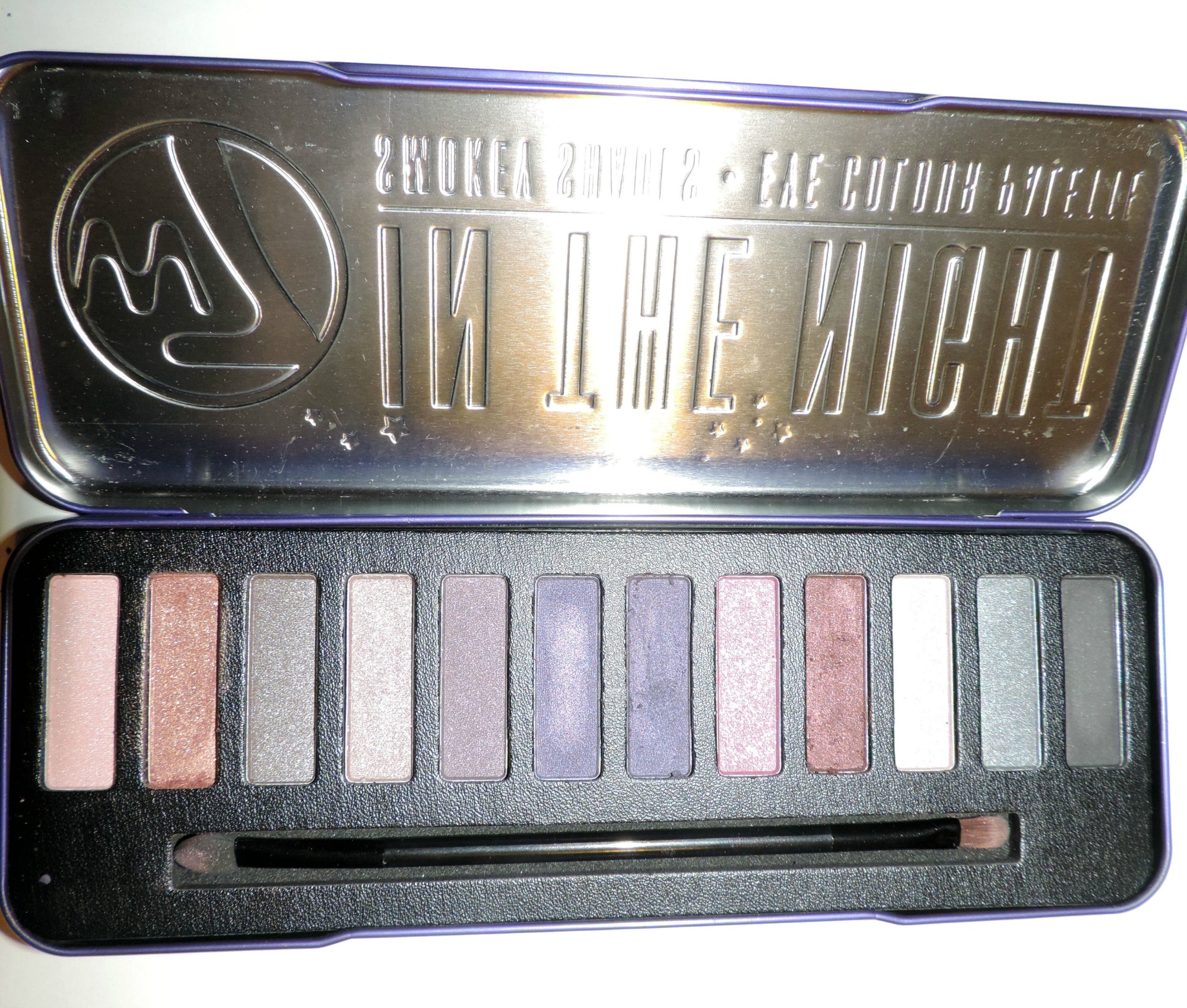 W7 have a few other palettes much like this one that I believe are dupes for the Urban Decay eyeshadows, so I definitely wanted to try this one out. When I swatched the colours using my fingers, the shadows themselves are very pigmented however this sadly doesn’t continue when using them on your eyes. But nevertheless, I persevered and came up with a makeup look as I went along! 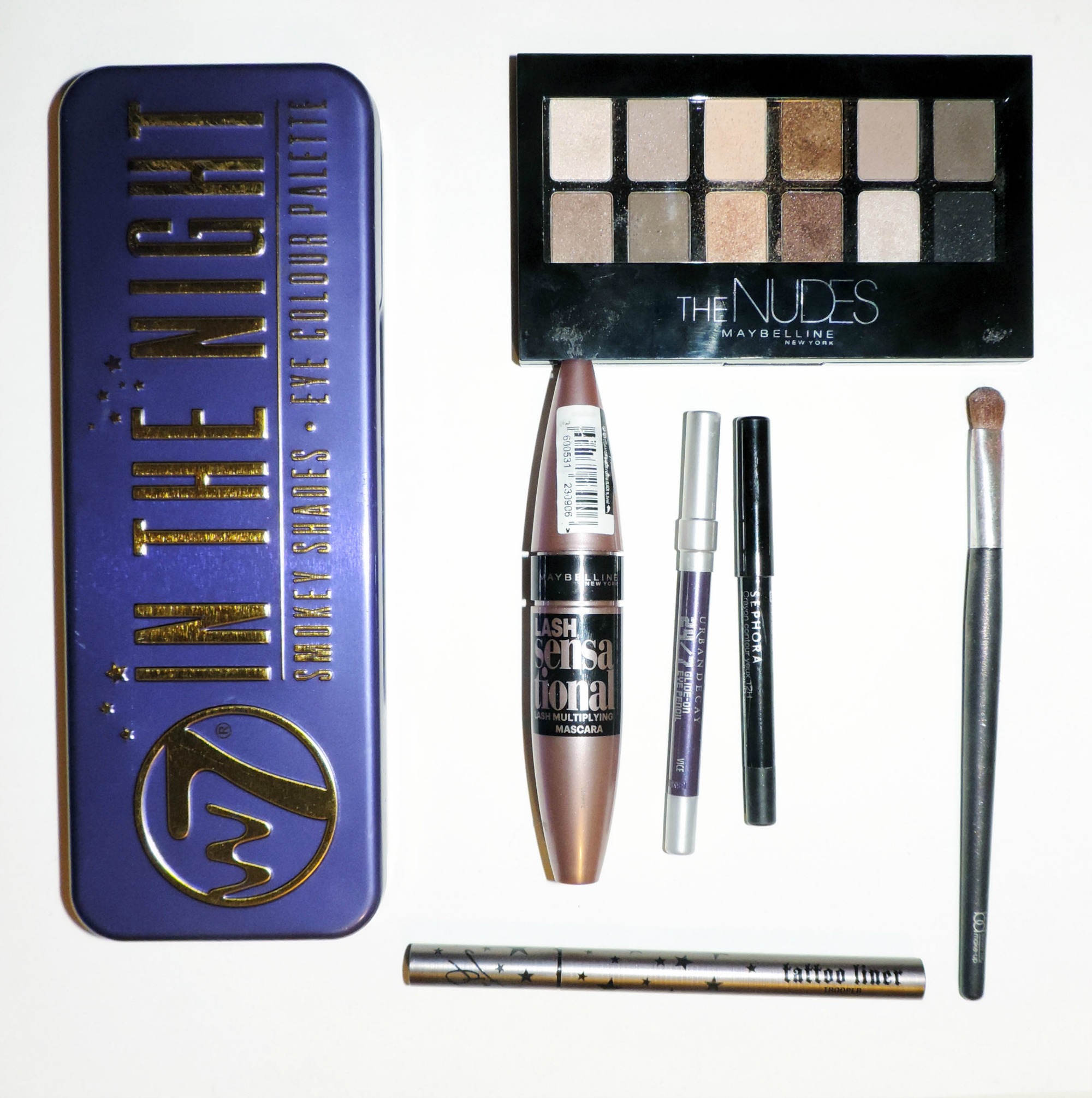 To assist this look, I also used The Nudes by Maybelline as well as an assortment of drug store and more high end products that I’ve accumulated, however if you’re wanting to recreate this look yourself, just use whatever products you have that are similar. I will also leave a list of products that I used as my base/on my face at the end of this post.

The Nudes palette doesn’t have any names for the shades, so as reference I’ve added numbers to each colour to make it easier to understand. 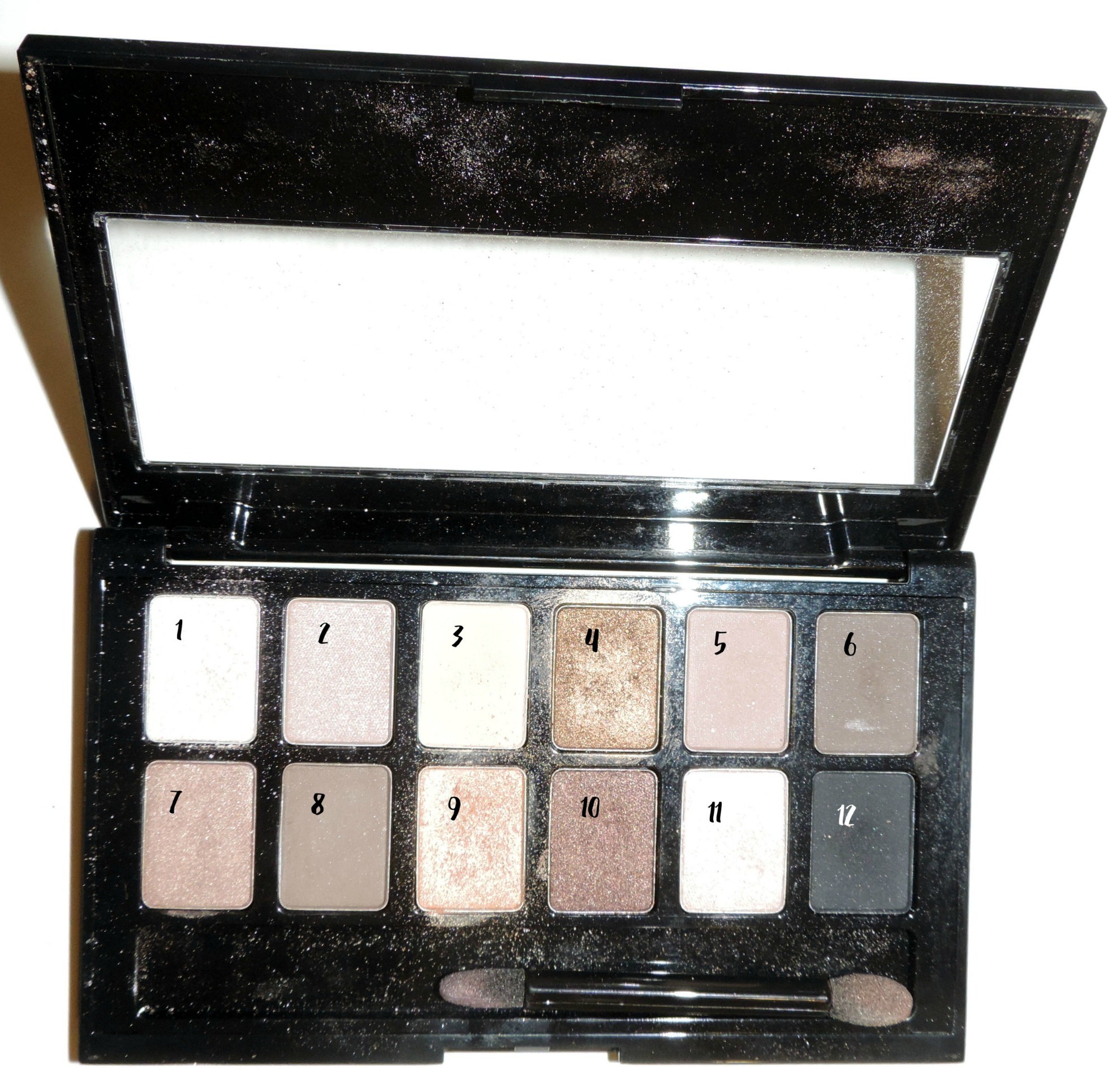 After priming my eyes using an eyeshadow primer (I usually just use concealer), I took shade 8, a dark matte brown, into my eyelid crease and built up the colour so it defined my eye shape. 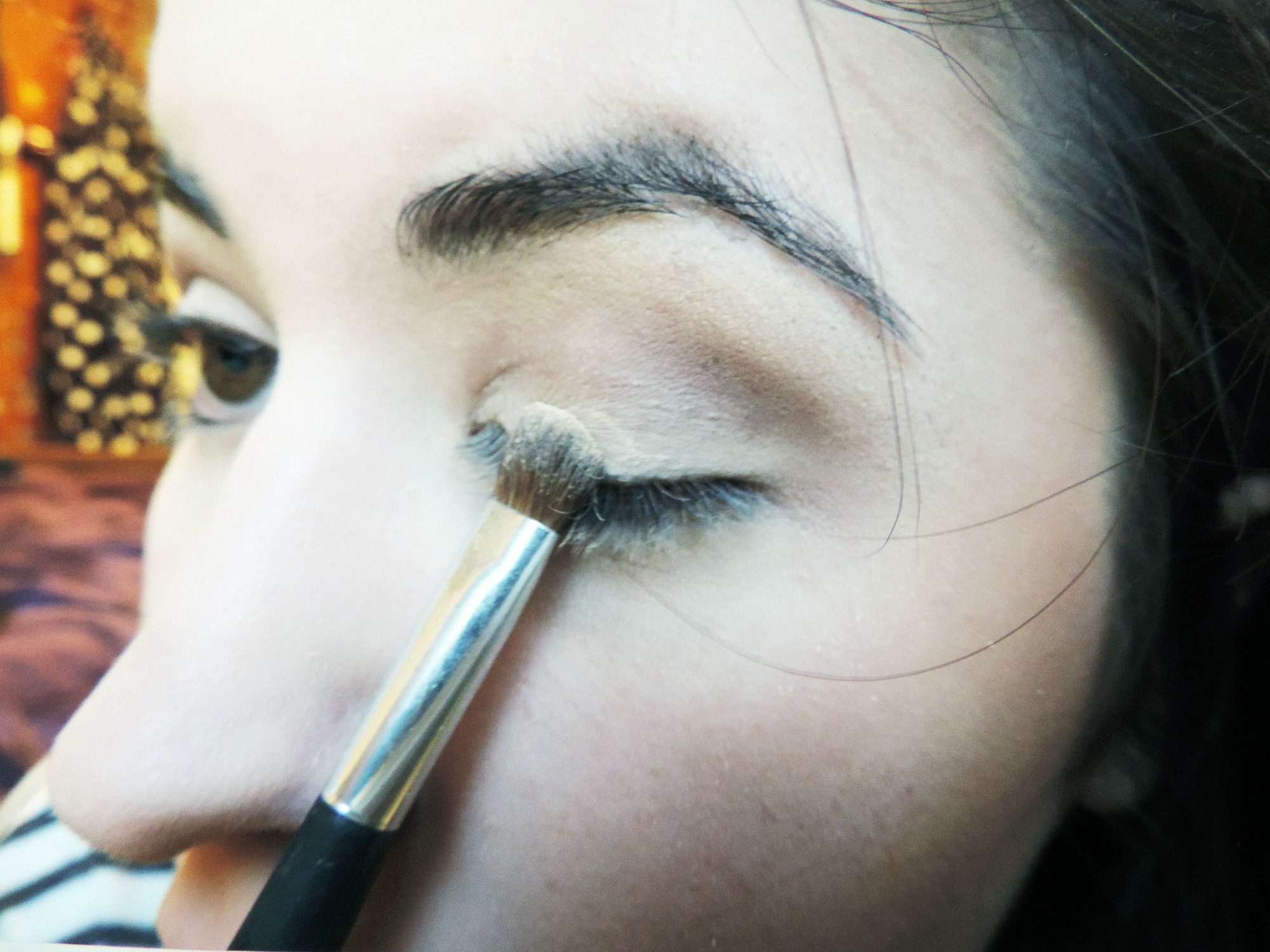 Using the same fluffy brush as I did for the crease, I used shade 3 which is a creamy-white colour just on the centre of the lid (basically what’s visible when you have your eyes open). I was pretty messy with this part, probably due to the size/shape of the brush I used but it doesn’t really matter anyway as I blend it and cover it with other colours later. 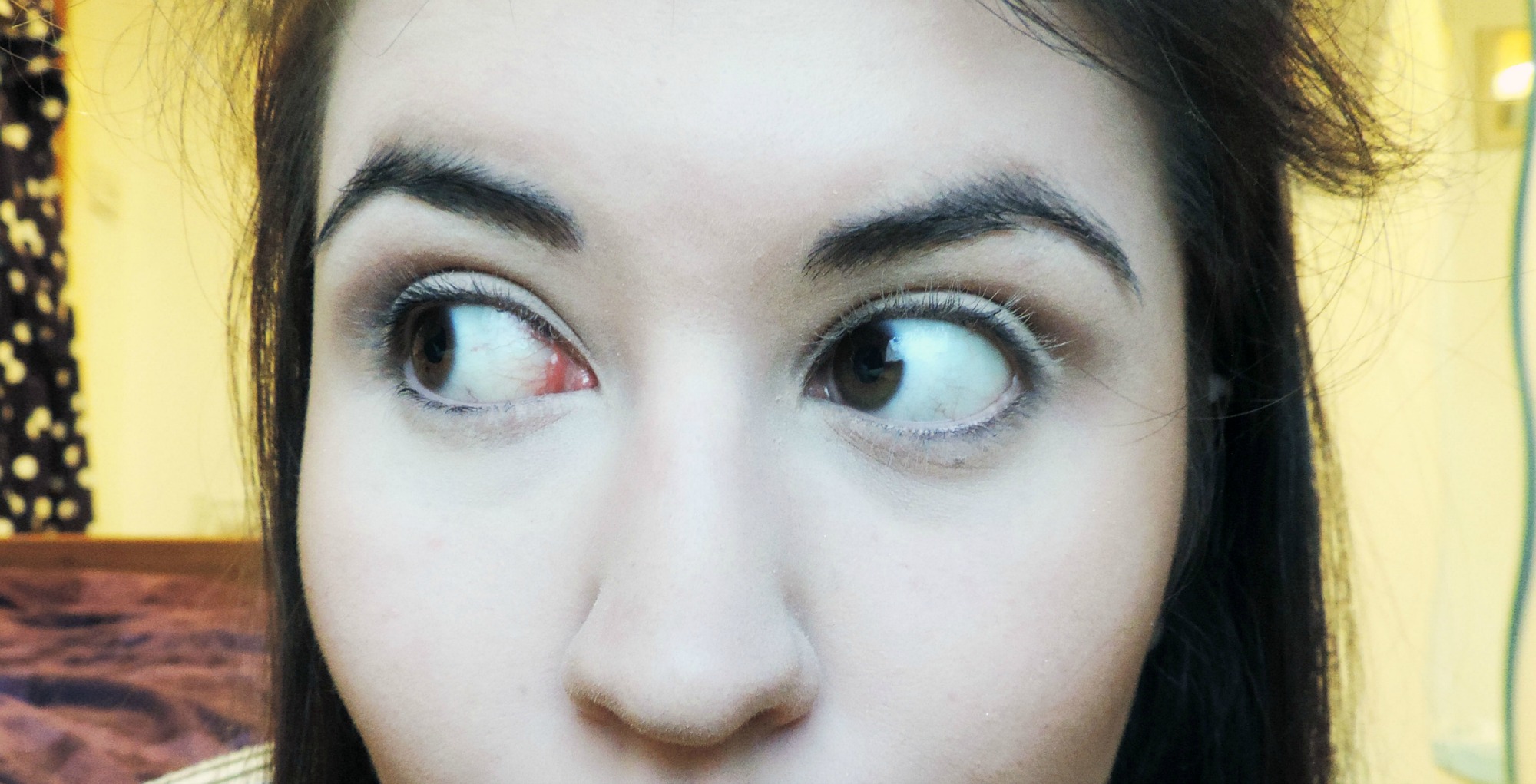 Next up, using the W7 palette now, I took ‘Wonderland’ – a shimmery golden colour – on top of the white shade I put on the lid. It’s got a slight pink tinge to it in the image below, although it’s much more of a warm gold shade in person.

The problem with the W7 colours is that you have to build them up a LOT just to get even a slight shimmer or bright colour. To combat this, I used a makeup setting spray on my eyeshadow brush to get the colour to stick better, which didn’t completely solve the problem but it definitely made it much easier and slightly quicker.

After this step, I did put ‘Laura E’ along my crease as it looked like a beautiful cranberry colour in the palette, but I didn’t feel it gave the drama that I wanted to achieve, so I wouldn’t say this step was necessary in creating this look as I just used the two purple shades ‘Top Hat’ and ‘Razzamataz’ over the crease instead. To create the winged, sharp edge to the shadow, I used a makeup wipe.

I loved the purple colours blending with the shimmery gold, so I wanted to continue this on the lower lashline. In an eyeliner set from Sephora, I received a purple Urban Decay pencil liner that I decided to use for the first time to join up the eyeshadow. It’s such a beautiful colour and was exactly what I was looking for. A cheaper alternative for this would be the Barry M Bold Waterproof liner that I found on Superdrug’s website! 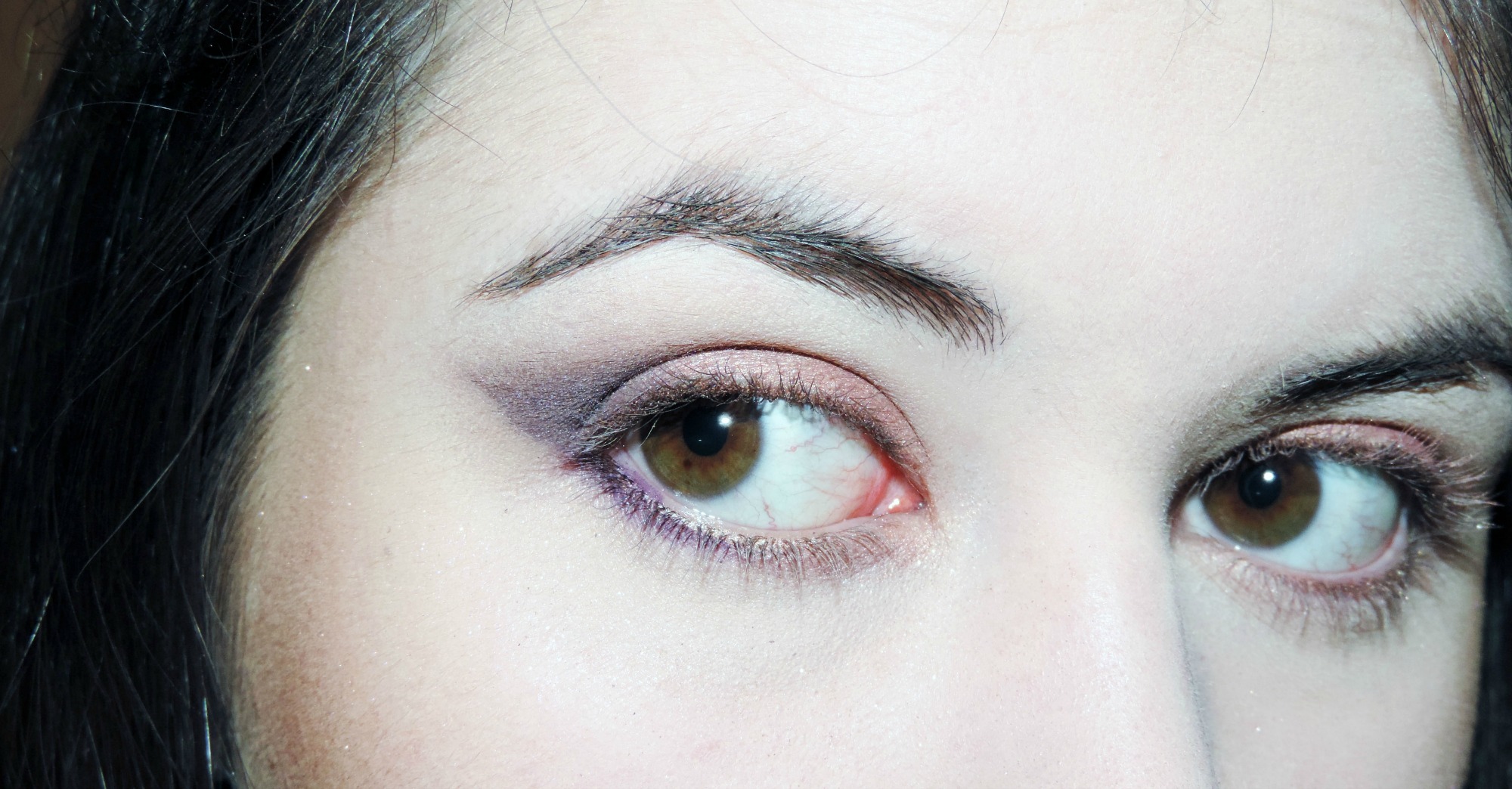 Once I’d applied all the purple I wanted, it was a question of adding the final touches. I just can’t do an eyeshadow look without eyeliner, and my new favourite liner is the Kat Von D tattoo liner pen that I got from Sephora in November. It’s easy to use, hasn’t dried out yet and is very black (if that even makes sense). I have had a bit of trouble with it not going onto areas if I’ve had to use a makeup wipe to clean anything up, which is frustrating but I’ve overlooked it as it’s a great product. One of the only eyeliner pens I’ve found that doesn’t transfer onto your eyelid even after it’s been on all day.

I went for a pretty big, dramatic wing for this look which I don’t always do but it worked well for this. I’ve also fallen back in love with the Lash Sensational mascara by Maybelline as I have been using the Too Faced Better Than Sex mascara since November, but it just doesn’t give the full length and separation of lashes that Lash Sensational does. 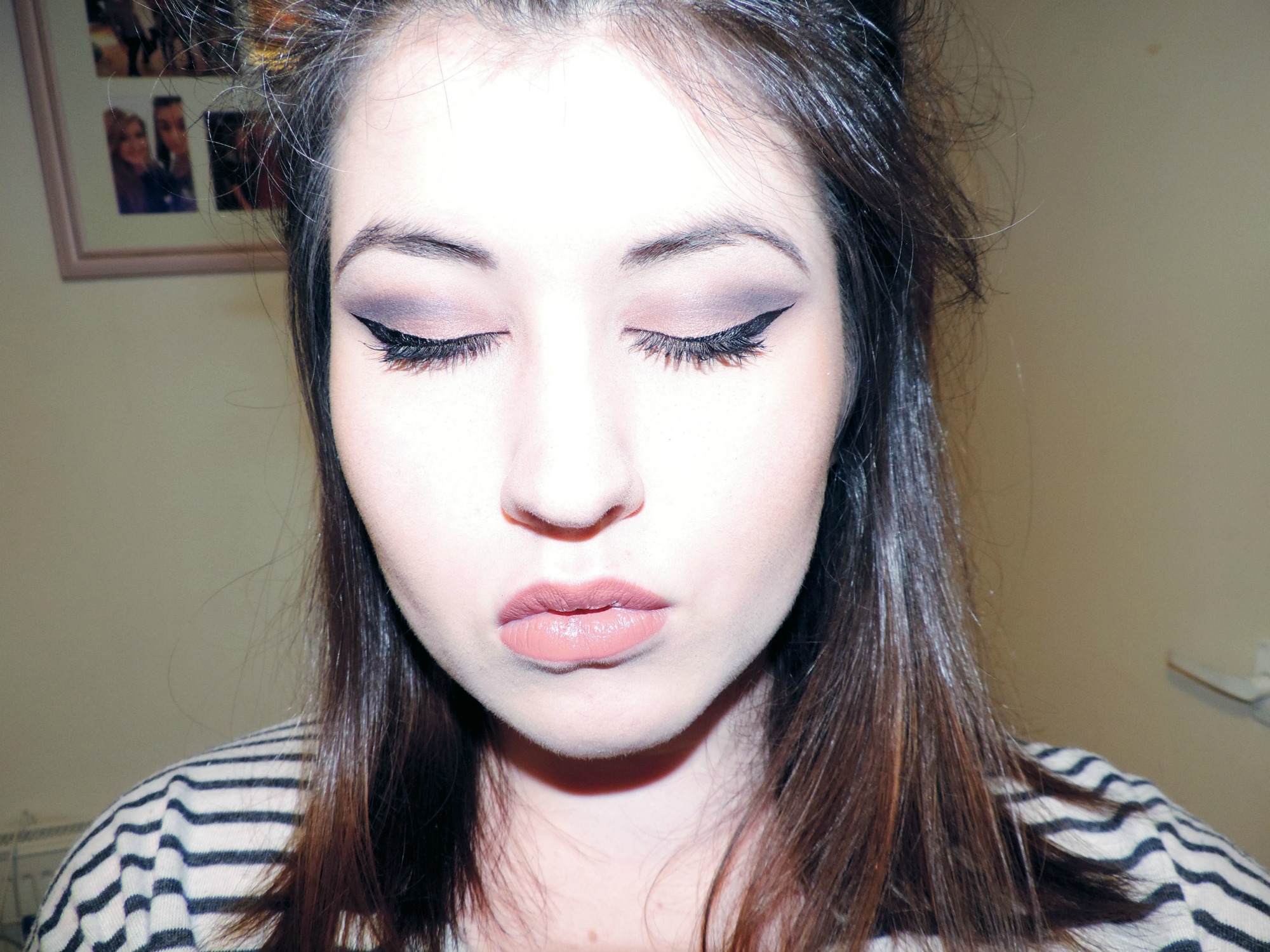 I paired it with a nude lipstick by Collection, and I was all done! I made it up as I went along so it’s a little skittish and experimental but I was pleased with the overall finished look! I would love for the purple to be more vibrant but it was the best I could do with the palette. If you have any suggestions for a good purple eyeshadow, I’d love to hear from you. Thank you for reading and I hope you enjoyed this post and this look – give it a try! 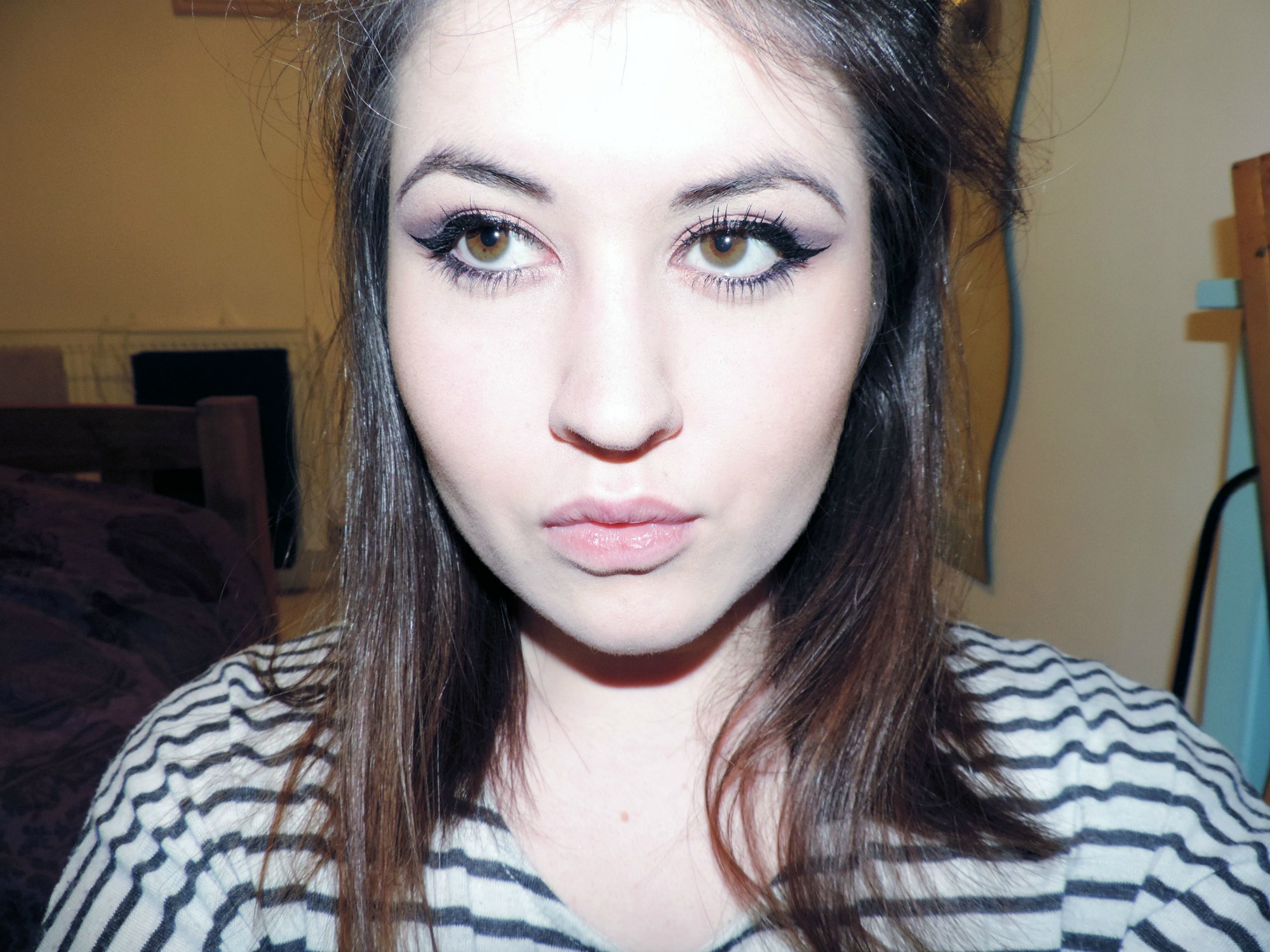 Products used on my face: